Many will agree that seeing a movie in a perfect cinema makes a great movie even better. So here’s a list of truly amazing cinemas, with amazing background stories. These unique cinemas will show you how wonderful it can be to watch a movie inside those walls. Have you been to any of these? Tell us what is your favorite!

Uránia Nemzeti Filmszínház was originally supposed to be a music and dance hall, but the place finally opened as a cabaret. From 1899 the building was rented by the Uránia Scientific Society, therefore fulfilling a scientific and educational role for 17 years. Later on the function of the building changed, but the name Uránia has remained ever since.

Pathé Tuschinski, originally Theater Tuschinski is considered to be one of the most beautiful cinemas in the world. The building contains Asian influences while the lobby was designed in a way to offer theatergoers the feeling that they are stepping into an illusion. When it first opened, the theater contained electro-technical features, then considered revolutionary.

Kino International was built in a special new kind of cinema architecture seen in the 1950s and 1960s. This new style was meant to give the viewer optimal viewing and sound experiences so the acoustic technology was developed especially for the theater and is similar to that of a recording studio. Multiple films produced by the DEFA (state-owned film studio) held their premieres here and the Kino’s last premiere in the GDR was Heiner Carow’s Coming Out on November 9, 1989, the day the Berlin Wall fell.

Matadero Cineteca stands out for having an audiovisual programme that focuses on real films (non-fiction films and forms bordering on documentary), the most alternative and independent film and collaboration with various cultural proposals in the city of Madrid. The Azcona Hall is considered to be one of the most spectacular cinema halls in Europe. The originality of the space, equipped with the latest sound and image technology, has made it into a reference on the capital’s film scene.

Le Grand Rex is an art deco style cinema and concert venue, noted for its sumptuous decoration and its outsized main auditorium, which is the largest cinema theatre in Europe. The Rex, as it was originally known, was built for Jacques Haïk, a wealthy film producer known for having introduced Charlie Chaplin to France. Haïk aimed to create the most beautiful movie theatre in Paris, where cinema-goers would have the illusion of watching a film in the open air.

The Electric Cinema, designed in the Edwardian Baroque style, was one of the first buildings in Britain to be designed specifically for motion picture exhibition. Not finding commercial success, it closed in 1993 and thereafter began to fall into disrepair. In 2001, the cinema was restored and re-opened after a 2 million GB.Pound facelift. A local resident, Peter Simon, funded the restoration, upgrading the sound and the screen.

Puskin Cinema (formerly known as Fórum Cinema) was the most elegant movie theater in town when it opened in 1926 – and it still is. For three years, only silent films were screened in its single hall, then, with the change of the times and a new owner, it was the first cinema in Hungary to screen sound films.

The Colosseum Kino is the largest cinema in Northern Europe. This cinema architecture is unique with a large spherical dome on top of it. The dome is measuring a diameter just above 40 meter which is the same as the St. Peter’s Basilica. In 1963, a fire shut down the Kino temporarily until the reopening in 1964.

The Rex is an Art Deco cinema with luxurious atmosphere from the 1930’s. If you feel like it you can enjoy a movie while drinking wine and eating snacks in a vintage interior where you can feel vibes from the last century. In 1988, the property was sold in order to be demolish for new offices. Thanks to a local support group, the Rex was spot-listed by English Heritage and protected from its demolition. Following different events, the Rex reopened in 2004 to the public. 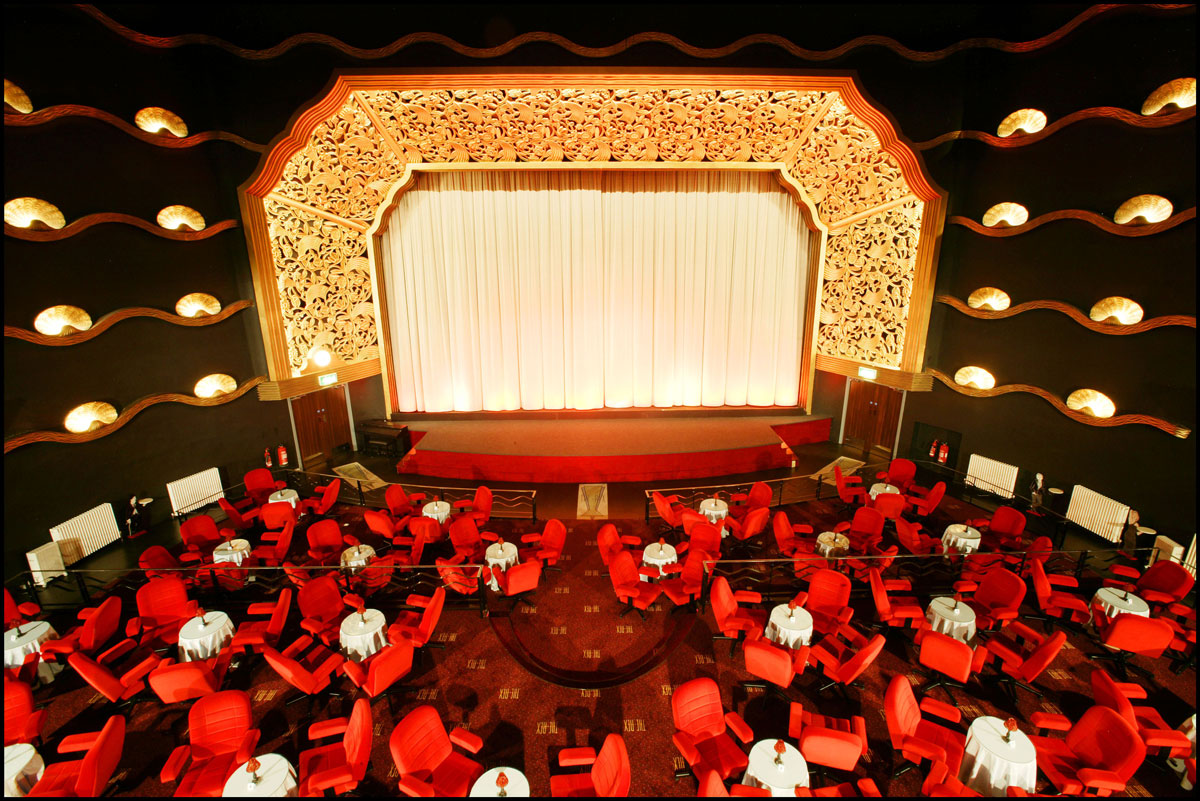 Kino Europa is a classy vintage cinema from the 1920’s and one the most beautiful cinema that you can find in Croatia. This art-house cinema is regional centre of film and film art with many film festivals and other events. Next to the cinema you can have a drink at the retro Kino Europa Café and prolong the Kino Europe experience a little bit more. Since 2013, Kino Europa is a protected cultural heritage site and Republic of Croatia national treasure.

The Kino Lucerna was one of the first permanent cinema in Europe. It is now the the oldest continuously operating movie theater in Europe. Located in the heart of Prague, this cinema has a unique style between Renaissance and Art Nouveau (cf. main feature image).

After being closed in 2004, one of the most iconic Irish cinema reopened last year and has been restored in the glamour and glitz of the 1920’s for the delight of the cinema lovers. Going to the Stella is a real unique experience with luxury seating, table service and a cocktail bar. And if you feel like laying down, you can book a sofa seat or a front row double bed and enjoy the latest blockbuster or classics movies.

Zhovten Cinema is one the oldest cinema operating in Ukraine and was the first cinema to have sound system equipped in the USSR. In 2014, Zhovten suffered great damage due to an arson during a film show on LGBT-related topic. No one was injured but the fire destroyed the main hall and a part of the roof. In 2015, after a fundraising campaign, the cinema reopens brand new with all modern requirements. You can now enjoy popular movies, but mostly for the wide selection of art-house films.

Opened in the 1920s as the Art Nouveau style cinema theater a was a symbol of modernity and prestige. Despite the fact that in 2008 a crisis arose and Slovenian Cinematheque decide to close the cinema. The cinema reopened thanks to the Municipality of Ljubljana, which declares the cinema as a new public institute. Ljubljana’s art-house cinema culture is now the home for the city’s flourishing cinema culture, with an emphasis on attracting new, young audiences.

Located in a pleasant neighbourhood, the Orion Cinema is one of the oldest theatres in the city. The beautiful art decor cinema is a cosy place where you can watch classics or forgotten gems with modern technology to suit today’s screening demands.

15 hit songs that you didn’t know were from Europe